How We Met: Since Matthew is my older cousin, we met at my birth.

Favorite Memory: How can I have a favorite memory of my cousin that I have known for 22 years? (Does this sound familiar?) Well, generally speaking, I enjoyed playing with Legos with Matthew. Every birthday and Christmas, we would shake our presents to see if they contained Legos. Matthew always had the best creations. My two favorites were his time-travelling pair of DeLorean and locomotive from Back to the Future I and III respectively. Sorry, no pictures :( Also, Shannon says that smart kids play with Legos :)

I also have a specific memory that comes to mind. My parents did not allow my brother and me to have any kind of video game system other than two Game Boys. Luckily my cousins had a Nintendo. Other than the classic Super Mario Bros. 3 and Duck Hunt, they had Christian video games. My favorite was Spiritual Warfare. We have beaten the game countless times, but this memory comes from before any of those victories. One day when my aunt and uncle were gone and Emily (Matthew's older sister) was in charge, we were all playing Spiritual Warfare together. The excitement grew as we passed a point in the game that we had never passed before. Then, Matthew accidentally bumped the Nintendo and froze the game. As a punishment for getting out of control, Emily made him sit in the other room...by himself. 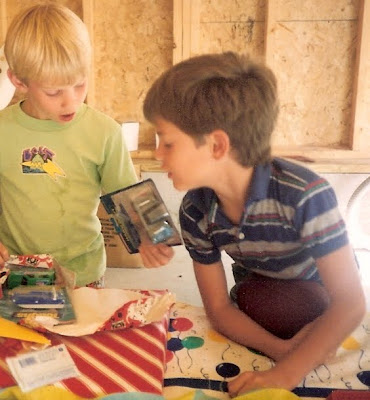 This is from a birthday party of mine in the garage of our old house. Did I get Legos? It doesn't look like it. 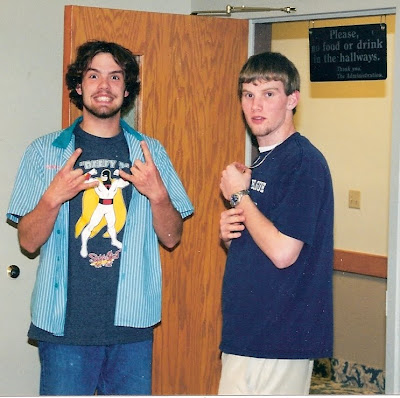 Here we are hangin' out at his church.