How We Met: Cathy and I lived in the same dorm (though on separate floors) our freshman year at ISU and were also involved in a couple of clubs together. Sophomore year we lived on the same floor (though we basically lived in each other's rooms) and we were then official roommates for three (yikes!) years.

Favorite Memory: A couple of summers ago (only the second time Tyson and I were ever actually together) he and I plus Cathy and her now-boyfriend Wilber were all hanging out together one night. Cathy and Wilber were in the back of the car when she started talking about how Minnesota is so much colder because it is SO much closer to the North Pole than Iowa, "Like, it would probably only take about 8 hours or so to drive there." Within five minutes of this revolutionary statement she proceeded to say (completely unrelated to anything else going on at the time), "Hey...shouldn't it be called un-planned parenthood?" My other favorite memory was when we decided it was a good idea during our sophomore year to watch all of the Grey's Anatomy episodes from seasons 1 and 2-a good 29 hours or so-in about the span of one week. We would stay up in my dorm room until at 2, 3, or even 4 in the morning because watching Grey's was so addicting. Good times. :) 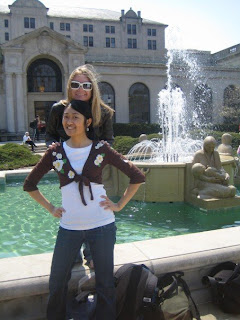 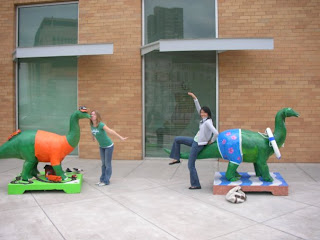 ...to summers in Minnesota (don't ask me to explain this picture)... 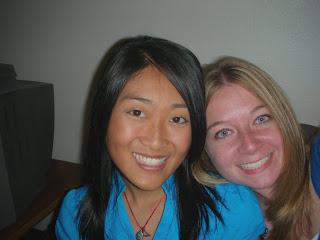 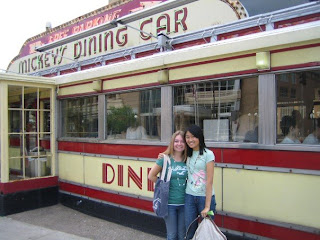 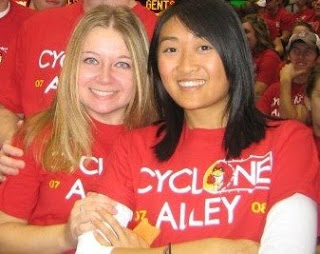 ...and back to ISU to cheer on those Cyclones! 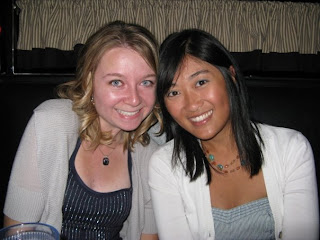 I'm so glad I met this girl over 4 years ago (and especially glad that I have friends who were also on the 5-year plan! *High-five*)!

How We Met: Aaron and I met in 7th grade because we had the same home room. Home room assignments were based on last name, which is why I met Dan Yap the previous year. However, I did not meet Aaron in 6th grade because he was at Hayworth that year. Our home room was awesome, literally the best. It was the mod tech room, which was air conditioned.

Favorite Memory: Aaron and I stuck together after high school because we both went to ISU. In our first semester, we both started out as engineers. It was pretty obvious that Aaron was not enjoying the engineering track. In the second semester, engineers take Physics I. Here is (the essence) of a question that we had in one of our exams:

You are on top of the ISU Campanile at a height of 80 m. You throw a ball weighing 5 kg directly parallel to the ground at a velocity of 20 m/sec. If you ignore the friction from the air and assume that the acceleration of Earth's gravity is 10 m/sec2, how far from the base of the Campanile will the ball be when it hits the ground?

When I read this question, I thought...However, Aaron thought,

"The Campanile is not 80 meters tall!" 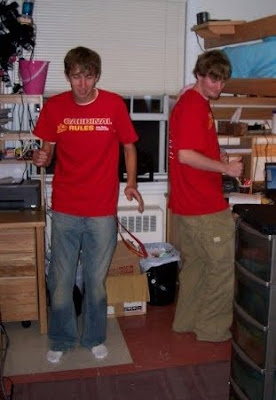 We are dancing in a friend's dorm room. If I remember correctly, this is our sophomore year and we are dancing to "Swingville Sashay" from extrememusic.com. 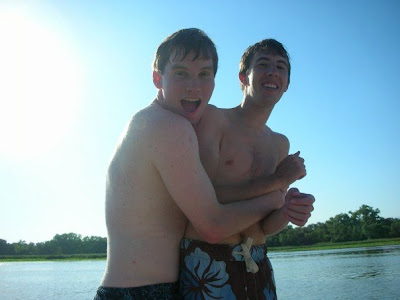 I think I like Aaron more than he likes me. 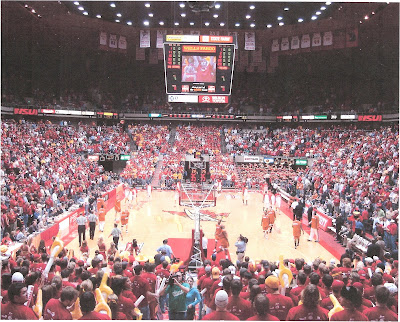 I spy with my little eye Aaron and Tyson. There we are...on the jumbotron!!

Aaron graduated from ISU in May where he majored in accounting and finance. He just accepted a job at IBM Rochester.

Posted by Tyson Diddley at 8:52 AM 0 comments

Name: Hailey
Status: Flower Girl
How We Met: Hailey is the daughter of my cousin's wife, and I am so glad...we needed some more girls around!
Favorite Memory: This girl comes up with more one-liners than a stand-up comedian, so it is hard to pick a favorite. However, when I asked her to be my flower girl I gave her a flower-shaped cookie that said, "Will you be my flower girl?" on it. As soon as I gave it to her she cried, "I can't READ!" Once I explained it to her, she proceeded to turn me down (though I think she was just confused and overwhelmed with the attention) before changing her mind and jumping into my arms to saying "Thank you, Thank You, THANK YOU!" Oh Hailey... 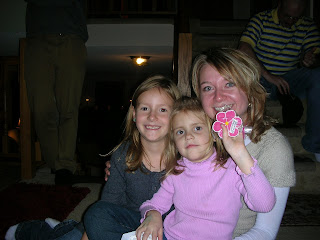 With her sister Taylor (who we will meet in a post soon!) when I asked them to be a part of the wedding. 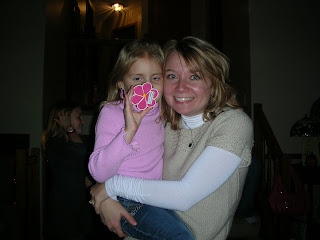 Not quite sure what she is thinking in this picture...but she is still pretty stinkin' cute!

How We Met: Dan and I met in 6th grade because we had the same home room. You know how I usually just say whatever I am thinking and only consider whether or not I should have spoken afterwords? Sometimes when this happens in school, certain classes get collectively annoyed at me. I remember this "class" being one of those, but Dan would just be laughing with me when everyone got mad at me.

Here is another story about home room. Dan and I would play Gin Rummy. I don't know what Dan's problem was, but he would take FOREVER to decide what he should do. While deciding, he would stare with complete focus at his cards relatively close to his face. As punishment for taking so long, I decided that I would cheat. Since Dan was so focused on his own hand, he never saw me when I would reach out, look at the top card on the draw pile, and put that card somewhere else in the deck if I didn't like it.

Favorite Memory: I was not there at the genesis of this inside joke, but Dan created a pair words: boji (pronounced "bo-ge") and boje (pronounced "bo-jeh"). They are both nouns that describe "a person that is so fat, if you pushed them over on a hill, they would roll all the way down." We used these words frequently in high school.

I rarely (if ever) have created my own words like this. So I found it really funny to discover one day in high school that Dan was not the first person to describe someone "as being so fat that she is round.

"...she is spherical, like a globe; I could find out countries in her."
~Shakespeare: The Comedy of Errors (Act III. Scene II.)

I just read the context in which this quote is found for the first time and the whole thing is funny.

Now, even though Dan and I have been friends for so long, we have no pictorial evidence to prove it. All we could find were two pictures from Homecoming one year in which we are both in a picture with all the guys in our group. I would have cropped and use them, but we are not even standing next to each other. Oh well. Our friendship is deeper than pictures anyway. 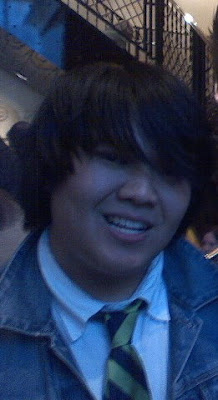 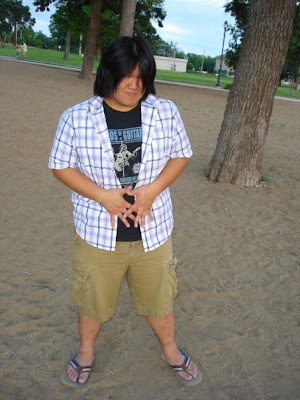 Dan went to Brown University after high school. After a year, he transferred to the University of Chicago and graduated from there last year. He now lives in Chicago with some job that probably has him working in a cubical.

UPDATE:
Here is some proof that Dan and I actually know each other (even if I looked possessed): 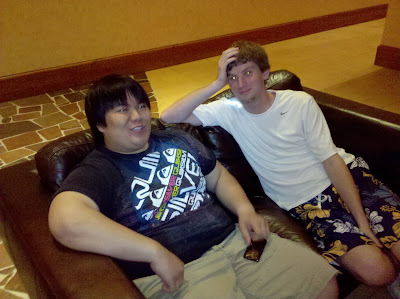 Posted by Tyson Diddley at 8:26 AM 0 comments